What we do locally

What we do nationally

What we do internationally 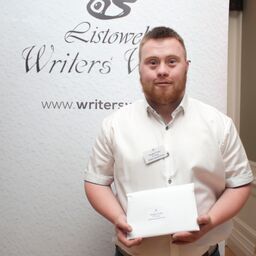 When my name was called out I went up on stage to accept my Prize. I was delighted and I had my photo taken afterwards.

My name is Stephen Faley.

I live in Ballyline, Ballylongford and I am almost 26 years old.

I have Down syndrome. I was invited to tell you all about my recent win at the Listowel Writers Week Literary Festival in Listowel from Wednesday 31st May 2017 - Sunday 4th June 2017.

I was awarded 2nd Prize of €400 in the Over 18’s Adult Special Needs Category for my story “The Night I Heard The Lightning” which was sponsored by Pierse & Fitzgibbon Solicitors, Listowel.

My teacher, Peggie O’Shea and class room assistant, Michelle Burke got the students in the Latch-On/Mote Course to enter a story for the Writers Week in Listowel.

My story was judged by an independent judging panel and my teacher Peggie was told by Eilish Wren of the Listowel Writers Week Office that I had been awarded 2nd Prize.

The night of the Opening Ceremony I was in the Listowel Arms Hotel with my Mom & Dad, teacher, Peggie and class room assistant Michelle and Jill O’Brien, the link person between Down Syndrome Ireland and the Latch –On/MOTE Course in Tralee.

I was nervous and excited. When my name was called out I went up on stage to accept my Prize.  I was delighted and I had my photo taken afterwards.

Kit De Waal who won a big Prize for her book – My Name is Leon invited me to stand in with her in a photo when she saw me wearing a badge like she was.

My teacher Peggie O’Shea took a lovely photo of me with Brendan Kennelly who is from Ballylongford, where I’m from.  He is a very famous writer.

I get his books and John B. Keane’s books from the Library in Listowel.

I like writing pieces from newspapers and books about sports and politics and I get very excited when a general election is called because I can go to the polling station to vote for my favourite politician.

Since I was 17 years old I have worked for two hours each week from Easter – October in the Deenagh Lodge Tea Rooms in the National Park in Killarney which is run by Down Syndrome Kerry during those months.

Last year I began working for 2 hours every week in the Down Syndrome Kerry Branch 321Charity Shop & Full Stop Cafe in Tralee.

I am part of a Social Farming Group in North Kerry with the St. John of God Adult Services.

I am chatty and friendly and I like meeting people.

In 2014 I volunteered for the Special Olympics Ireland National Games in Limerick in the Football area in UL to help out with the other volunteers every day during the National Games.

I was awarded Volunteer of the Games and I have a photo of my award.

I am an athlete with the North Kerry Eagles Special Olympics Club.

I cheer for the Kerry GAA Team and my favourite players are The GOOCH (Colm Cooper), Kieran Donaghy and David Moran.

I support the Munster Rugby Team and the Ireland Rugby Team when Johnny Sexton is playing.

I have been to rugby matches in Thomond Park.

I love music and I download music discs of Nathan Carter, my favourite singer and other singers on to my ipad and iphone.

I use them when I am asked to be DJ Steve at St. John of God Discos in Tralee and Killarney.

I like drama and I have a social media Facebook page.  I enjoy watching Mrs Brown’s Boys.

I love travel and I have no fear of flying in planes.

Here at home I have been to Croke Park, Spike Island, Knock Shrine and Birr Castle to see the Giant Telescope.

I like looking at the night sky to see the moon and the stars.

My first plane journey was to Lapland in Finland when I was about 10 years old to meet Santa Claus.

I got Certificates of my visit there.  With Nano Nagle Special School in Listowel I have been on School Tours to Lanzarote, Tenerife and Mallorca and also to Orlando, Florida.

I have been on two IHCPT Pilgrimages to Lourdes.  Mom took me to New York in 2012 for my 21st Birthday and to visit my sister there and we had to stay there for extra days because Hurricane Sandy happened after we got there.

Last year Mom took me to Rome for my 25th birthday to see Pope Francis.

I was happy to see him in St. Peter’s Square.  I am always busy because I like to be involved in life.

We thought Abu Dhabi was a great experience and we'd love to go back.

Shona Connolly talks about her trip to see her sister

Hello everybody my name is Shona Connolly.

My sister has been working in Abu Dhabi for the past 2 years so myself, my Mam and my brother went for 9 days.

We headed off to Abu Dhabi.

The flight was long enough - 7 hour but we were able to look at films on the plane and had a meal so the journey went very quickly.

We had an early start so I also slept too!

On the first day we went for afternoon tea in a beautiful hotel - in the sunshine.

On the second day of my holiday we went to Yas Water Park.

We went on a fantastic roller coaster and really long slides and rides.

We all went together and had great fun.

We spent the whole day in the water park and I'd love to go back.

It was one of the highlights of my trip.

The following day we went to Dubai and saw lots of tall buildings and the biggest Mall in the world.

Also the tallest building. Dubai is full of tall buildings so I think I'd prefer Abu Dhabi.

We also went on a small boat ride in Dubai.

One day we went on a fantastic trip in the desert.

It was very exciting.

We went in a jeep and went over the sand hills, really fast.

Then we had our meal in a lovely place in the desert.

We were able to serve ourselves so we had lots of lovely food to eat.

Myself and my Mam had a great time riding the camel.

Myself, Mam, Christine and Eoin climbed the sand hills and skidded down on a skate board.

There was also dancing entertainment.

I really enjoyed that time in the desert.

Because the weather was so nice we were able to have very relaxing day on the beach so I was able to read my kindle for a good while, listen to my music and a nice sleep in the shade. We spend good few hours on the beach.

We went out for dinner in the shopping mall celebrating my brother's birthday in a nice restaurant.

I thought the meal was delicious and enjoyable.

After dinner we were playing bowling in the mall.

I came in 3rd place for the bowling but it was a tough competition between Eoin and Mam.

I did my best I can to catch up but I will practice to get better in the bowling.

I had a great time.

We all went to see the mosque in Abu Dhabi.

It was beautiful - especially when it got dark.

We had to wear habits and my Mam said we looked like nuns!

Myself, Mam and my brother Eoin all enjoyed this holiday.

We thought Abu Dhabi was a great experience and we'd love to go back.

My sister will be coming back in June for good but the Special Olympics will be there in 2019.